This zoom, introduced in 1981, was the first Canon lens with autofocus independent, whose operation is based on a triangulation system telemetry, it was contended by various judicial case that claimed authorship. You will find the details of this curious goal in the interesting article by Marco Cavina. 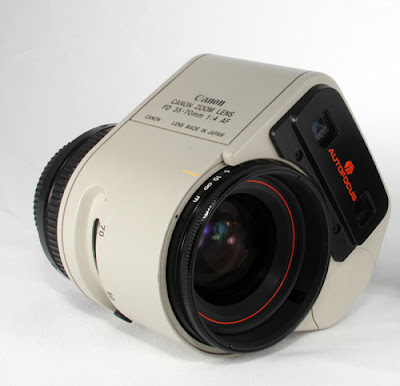 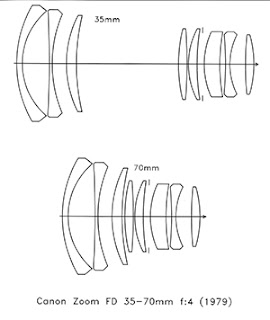 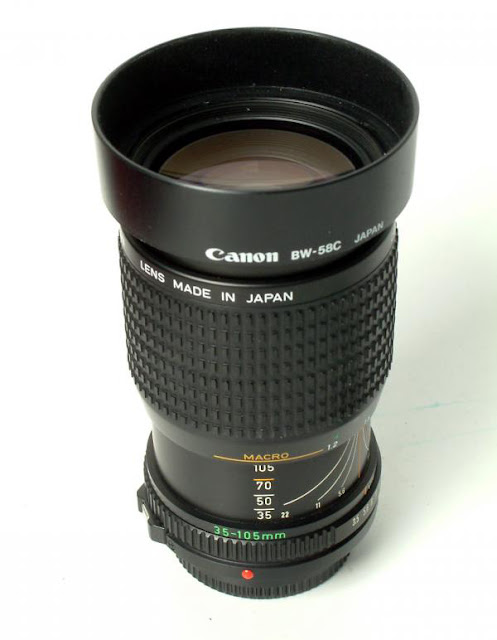 This small , lights and compact zoom noso today is little know ut or it was introduced in 1985, to the decline of the system FD. Not to be found on the book “lens work” that was no longer ristampat or why now was the impending launch of the EO S.
(Curiously appears in the catalog “lens wonderland” of 1982 )
Yet is a zoom very noteworthy, airy , well corrected, with an excellent contrast in spite of the lenses 14 of which it is composed, one of which is aspherical. The remarkable ability to read the shadows. It looks resigned and anonymous, that does not bode qualities. The system of focus / focal adjustment is monoghiera parafocality, which makes it quick and easy to use. 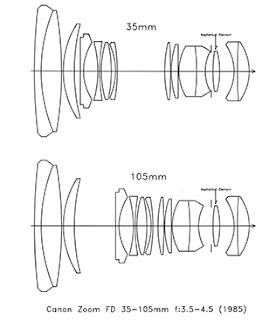 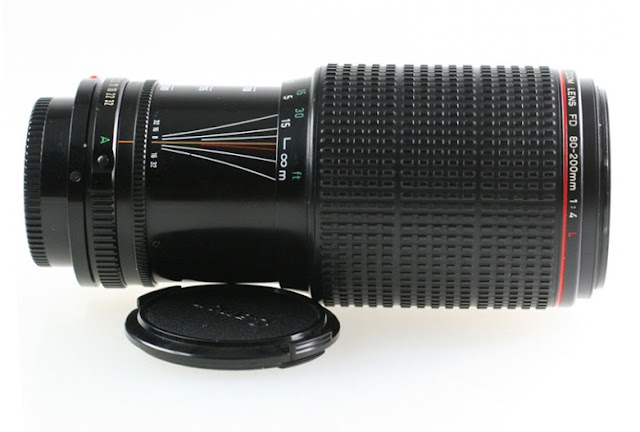 Quest or zoom has been the forerunner of modern zoom 70-200, authentic bestseller among photo enthusiasts.
It ‘a zoom command with mono -focal ring with a lens and a fluorite len you low dispersion (UD).
Has a ‘airiness, A resolution, and color rendering to record , as demonstrated by the high price that still keeps s ul market of ‘used, on the rare occasions that happen to view it.
What really amazed leaves, in particular, is the color rendering on the flesh. Hard to really see better. 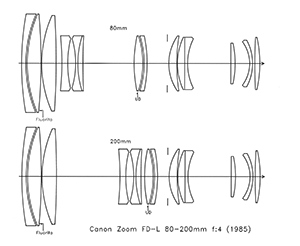 Esempio7
Esempio8 (yield on the flesh)

In FD system existed a semiduplicatore and 2 doublers: 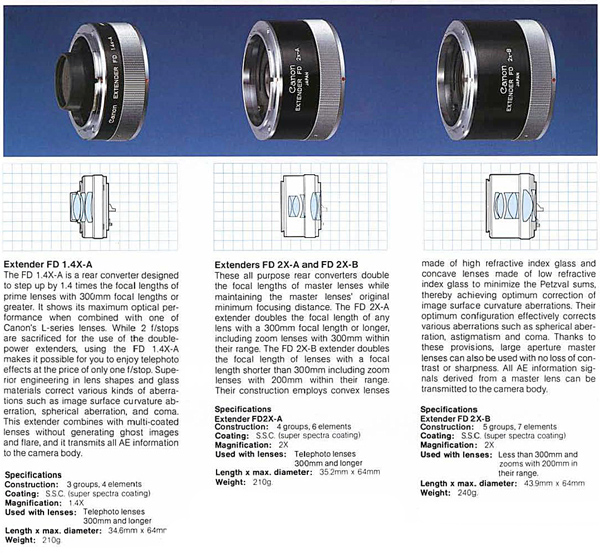 Lens construction: 4 elements in 3 groups.
For focal greater than or equal to 300mm.
Exposure correction: no.
ebay Price: 150 €.

Lens construction: 7 elements in 5 groups.
For focal less than 300mm. Exposure bias: -2/3 stop with lenses f / 1.8 or brighter -1/3 stop with lenses f / 2.0 or brighter ebay Price: 150-200 EUR. The corrections mentioned are required for both the black and white, both for color negative, but especially for the slide color, whose exact exposure is critical for the correct color saturation. Unlike what happens with the current duplicator , where in the camera is indicated a diaphragm halved, in the camera FD maximum aperture is not reduced by half, but exposure meter takes into account the fall of light positioning two stops below the value that it would no doubler (for example, if framing without doubler I F / 4 – 1/1000, mounting doubler I F / 4 – 1/250). A more intuitive than the current practice as a formal point of view the maximum aperture is not changes, it just happens that the light is distributed over a larger area thanks to the duplicator and this obviously requires a shutter speed longer. Examples FD 300 / 4L with Doubler 2X-A: Example 1 Example 2 Example 3

Adaptation of FD lenses on the EOS system

When fit different lenses on cameras, even before the issues relating to the loss of automatic, you have to make one comment on the preliminary draft, which is the distance between the film and the filler plug. If the lens has a draft of less adattatare in the original, will focus in front of the film plane and you can use it just by inserting a corrective lens, because you can not ‘physically closer. If you have a draft greater, will focus behind the film plane, in this case just move it away by interposing a ring having a thickness equal to the difference of draw (subject to considerations relating to the circle of coverage). The system FD (but also the predecessors FL and R) has a draw of 42mm while the EOS system has a minimum draft of 44mm. This is the reason why adapt the optical FD requires a negative lens correction. Paradoxically then the system canon FD is the most penalized because of the fact the adaptation of such objectives is problematic, if not discouraged. At the time of the introduction of EOS system in 1987 were put on the market by canon 2 adapters to use the system on FD EOS. They were never sold to the public but were sold as spare parts only to professionals (what today corresponds to the PSC) The adapter with optical unit cost the beauty of 735,000 pounds in 1993. The first, called ” Canon Lens Converter FD-EOS “: 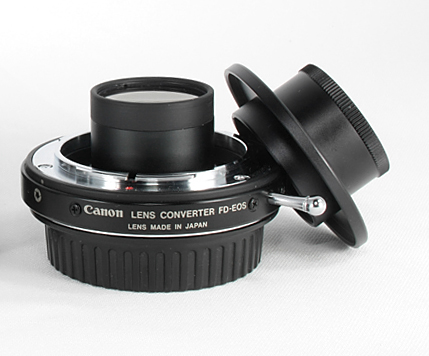 It was designed to use only the following super telephoto FD: Fixed:

(The catadioptric 500/8 can only be mounted by interposing an extension pipe FD 5mm, losing the focus to infinity)

This adapter therefore was not usable with no other goal due to the optical unit projecting; He had a multiplying factor of the focal equal to 1.26, in addition to absorbing light for 2.3 aperture. Today it is impossible to find, it rarely happens on eBay, but you get to pay over $ 1500 being considered a rarity; This photographed was my personal copy, then sold after the recantation of the EOS system. The optical quality guaranteed by this special adapter mounted on a super telephoto FD of digital cameras is very high; observed by way of example two photographs: the first of a light pole 50 meters away, the second of a group of houses at about 500m. (Objective FD 500 / 4.5L of camera 1Ds mark III with original adapter) Example 1 Example 2 are commercially available universal adapters having a corrective lens (some with a chip of confirmation for the focus) that allow the adaptation of any objective FD; However, it is built only one lens (maximum two), sometimes in plastic, often without antireflection coating (against the 4 elements in 3 groups of the original treatment with super spectra SSC) you can ‘easily figure out which image quality is He will meet; as an example I show the qualitative decay adapters FD using a commercial FD500mm F / 8 SLR canon with spacer 5mm: This picture is achieved with the adapter on the market. This picture instead with the original adapter.Apart from the factor reduction equal to 26.1 introduced by the latter, the difference in quality is quite evident. An important note: The adapter is not fully compatible with the first telephoto breach lock. In fact, these objectives the plate delimiter circle covering the case back has a rectangular shape that prevents the entry of the optical projecting. On later models with graft newfd this sheet it was shaped specifically. In this photo you can see the original shape and dimensions of the red light unit: 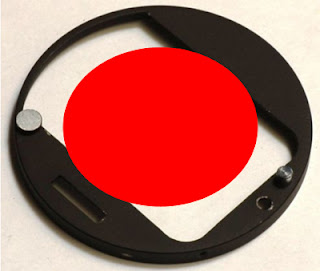 Americans on some forums I read that the latest versions of breach models were updated with the profiled steel plate, but I do not have any feedback on this.
The solution, however, is simple: it is to disassemble the plate and sagomarlo with a file. The second original adapter , called ” Canon macro lens mount converter FD-EOS “: 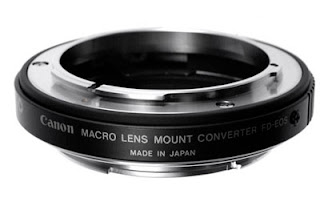 It is a hollow ring designed only to recover the use of FD macro lenses, and of course does not allow the focus to infinity. This, too, is rare and very rare, but they exist in actual production; both feature a lever (almost never shown) that allows to bring the diaphragm open aperture to perform the measurement of the light. The obvious loss of automatisms requires to work in manual mode, or in aperture priority. 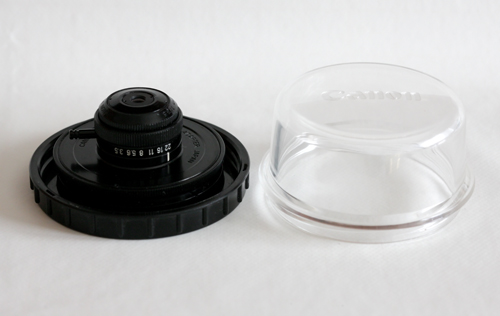 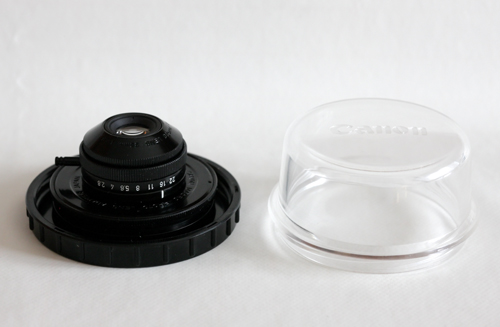 Objective specialized microphotography to use the bellows, with screw-fitting RMS microscope. As a curiosity I show the components of this particular objective: 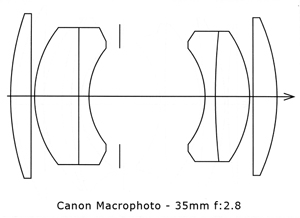 The 8 duplicator is an accessory lens photomicro, 20mm F / 3.5.
With two other duplicators, the duplicator 16 (to be mounted on the 35 F / 2.8 photomicro) and duplicator G (of which there is no documentation) was thought to transfer to film 135 format home movies 8mm, 16mm (at the time very used) and photographs for medical use produced by cameras dedicated (G). Such rare accessory requires to be screwed on one of the two objectives for microphotography, whose front element Taper is unscrewed using thread owner (not RMS). Magazines of the time was often referred to as “reprocine”. The optical element Köhler doubler, derived from microscopy, has condenser and field diaphragm fixed, and serves to uniformly illuminate the frame. Photomicro through the lens mounted on the bellows bellows can enlarge the frame of the film at will (within the limits of the resolution of the original film). It ‘obvious that transfer an entire movie on 8mm format 135 is a tremendous undertaking, since it is necessary retaking each frame manually not being provided no automatism for the sliding of the film, that is, it must be manually move the film frame by frame by stopping the locking system incorporated in the duplicator, whose head is hinged folding. The purpose of this duplicator is to recover individual frames, or otherwise short sequences of frames from limited system capacity FD new, namely the hundred frames of the spine special corrispondendi in just over 4 seconds of footage, or 250 frames of the old system. Here’s what the duplicator 8 attached to the 20 F / 3.5 photomicro with conical ring removed: 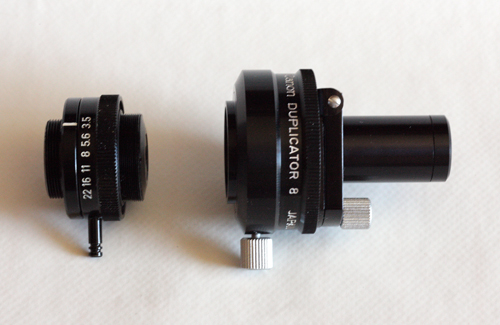 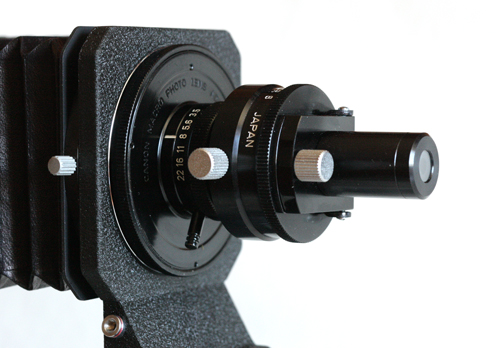 But here you can see the duplicator with the element Köhler overturned to allow the insertion of the film, driven by steel pins: 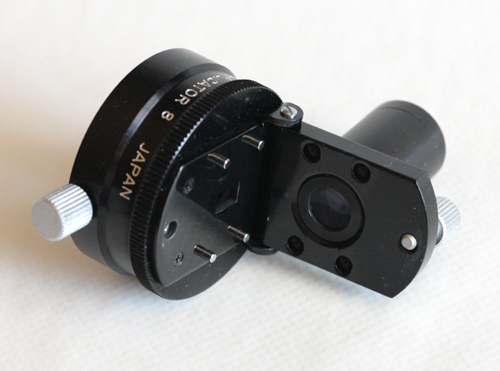 Being dedicated to the use in combination with the objectives photomicro, has taken no use to him. If someone was in possession of precious 8mm home movies and family volessere recover some frames, now knows how to do. I can not tell you what his quote on ebay: I hunted for four years without ever seeing it, and just recently we have got hold, paying him $ 82. This is a legend: the first goal of the series, put on the market 50 years ago, with lower brightness of F / 1, emulated by NOCTILUX only 30 years later.
It ‘was nicknamed “dream lens”. 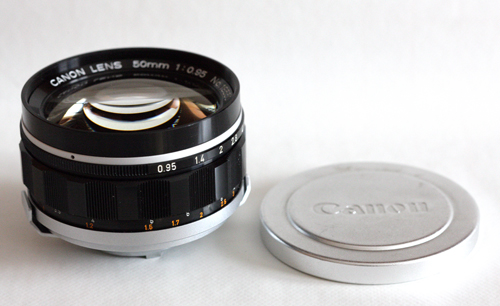 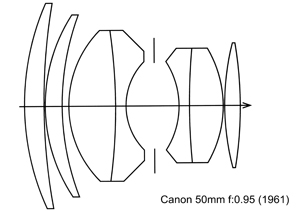 The following is an X-ray showing the high optical density of this legend (courtesy of Marco Cavina and Dr. Milos Paul Mladek Wien): 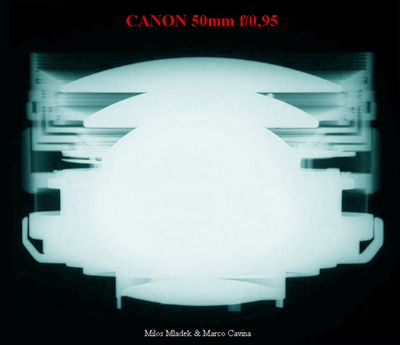 Once again I thank Prof. Vicent Cabo that after reading my article sent me the correct optical scheme of 50 f / 0.95